The RVHS Prom has been moved from May 4 to April 13, due to scheduling conflicts. The location has also changed. Prom will now be held at the Capitol Plaza Hotel in the Emerald Ballroom.

Royal Valley will be acknowledging a law put into place by the Kansas State Legislature this school year. Though it was already allowed to our Indigenous students, the Kansas State Legislature has passed a bill, House Bill Number 2498, stating the government is not allowed to prohibit the wearing of tribal regalia and objects of culture significance at graduation. In other words, high schools can not prohibit Native American students from wearing traditional regalia. This law went into effect July 31, 2018.

At the beginning of the school year, Mr. Holloman put together a committee of six Native American Seniors to discuss what the school’s policy should be for future graduation. This committee’s members included, Zach Wahweotten, Kobe Mills, Trent Wilbur, Kiikto Thomas, Top-ne-bi-que Serna-Blakemore, and Daniela Fabila. These Seniors decided that there would be four different options for Native American students to wear at graduation:

Traditional Dress - Native American students may follow the current policy of nice clothing under the purple robe, while stole and purple mortar board.

Member of the Native American Senior committee, Zach Wahweotten stated, "I think it's a smart decision of the Kansas Legislature. I'm glad the government is finally recognizing the Native American citizens, because we are an important part of society. I am grateful for the opportunity to represent my culture in a positive way." 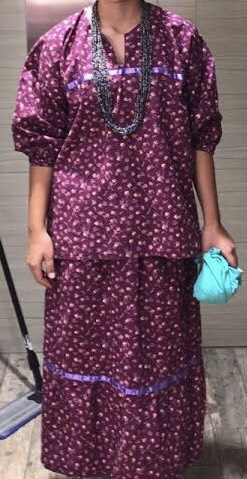